“Hey, Professor!” Charles turns around to see a very short, very wide man stamping and scraping his feet on the cinders. His blunt, wide head is lowered beneath his mountainous shoulders, and a massive nose ring loops between his snorting nostrils. “Who are you? asks Charles. “I’m a real angel,” says the man. “Then where are your wings?” “Don’t be stupid! That’s just a cliche.” Even before these words are out of his mouth, the man has begun running toward Charles, ramming his blunt forehead into Charles’s solar plexus and knocking him onto his bewinged back. It is a moment before Charles can catch his breath. He sits up and asks, “What did you do that for?” “To teach you a lesson.” “What kind of lesson is that?” “What other kind of lesson is there?”

Here’s the lesson: stop-limit orders don’t limit your risk when a stock gaps down after hours.

Look at the chart below. Say you that when ROKU hit $85 on Thursday, you placed a stop-limit order on it with a limit price of $76.50, 10% below the then-current market price. That stop-limit order wouldn’t have gotten executed, because ROKU never traded at $76.50. It only traded as high as $66.46 during market hours on Friday. 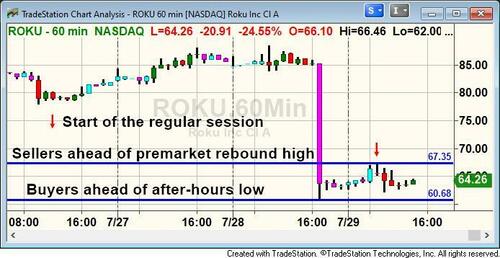 A stop-loss order would have gotten executed, but it wouldn’t have limited your risk to a 10% decline either, for the same reason. It would have converted to a market order on Friday morning, and you would have likely gotten out at closer to day’s low of $62 than its high of $66.46.

What If ROKU Longs Had Hedged?

Let’s look at a couple of ways ROKU longs could have hedged before earnings on Thursday and how that would have limited their downside on Friday.

This was the optimal collar, as of Thursday’s close, to hedge 100 shares of ROKU against a greater-than-20% drop by January, while not capping your upside at less than 20% by then.

This was the optimal collar, as of Thursday’s close, to hedge against a greater-than-9% drop by Friday, while not capping your upside at less than 8% if ROKU’s earnings had been good.

If You Want To Stay In Touch

Hedging
ROKU
← Our Factors In Action
→ ROKU Bounces Back